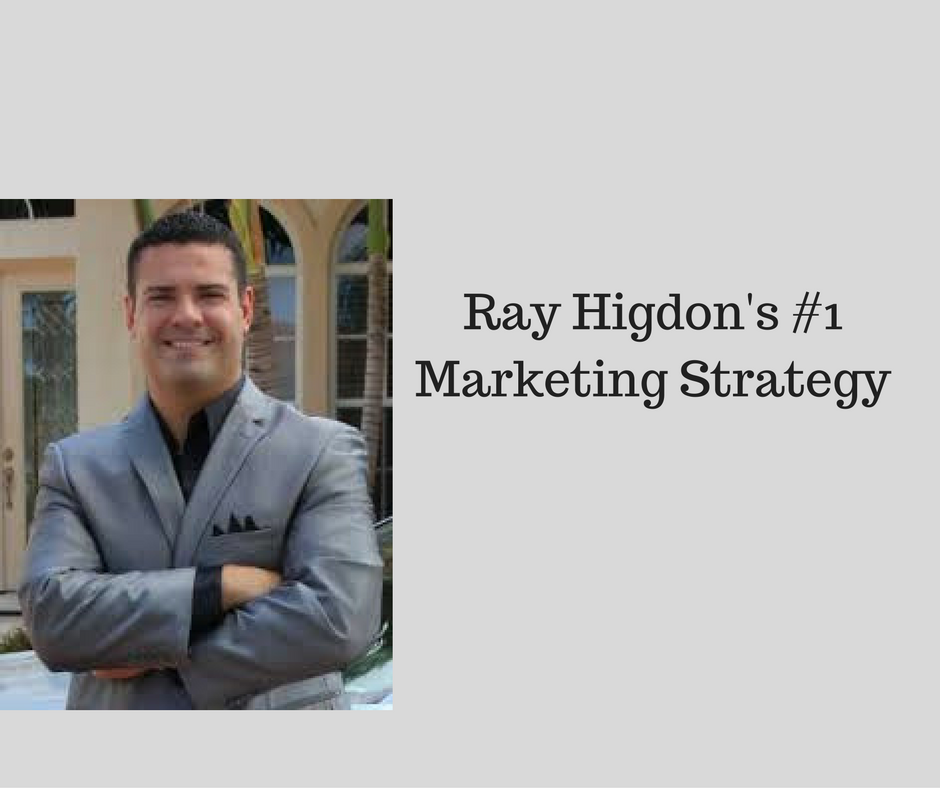 Friday night Ray Higdon broadcasted live on Facebook and Periscope talking about the #1 marketing strategy that got him to his first $1Million dollars and ultimately the reason he is where he is today. As always Ray gave some very good information. If you have never heard of Ray Higdon I highly recommend you seek him out and follow him. The dude knows his stuff when it comes to building a profitable business, especially if you are in network marketing. With that said, I thought I would share with you what I learned from Ray.

So let me ask you; do you know how to go from struggling in your business to being profitable? Well a lot of times it has to do with your mindset. According to Ray if you have been in network marketing for more than a year and you are doing everything right, i.e. prospecting, attending events, adding value to your audience, but you still aren’t making $1k a month in your business then chances are you are spending way too much time in your head! I really hate when Ray is right. I swear sometimes I think the man is talking directly to me. I know for a fact I waste more time researching and looking for ways to make my business work then I actually do implementing. UGGG.

So first things first- what you have to realize and possibly move past is that money is not the root of all evil.  In fact, if you think of money equal to impacting lives then the more money you make means the more lives you have impacted and if you draw that conclusion you should never get stuck at any particular income. The sky is the limit. On the flip side, if you associate money to greed, selfishness, or negativity you will stay broke because you have it in your head that money is the root of all evil. That’s a totally other post to get into, for the sake of this post I am going to assume you want to make money and impact a lot of people’s lives, so let’s stay on that path.

So how did Ray make his first Million dollars? Well he started out doing what every network marketer does – prospecting. Prospecting is the first marketing strategy that all network marketers learn. Ray started with his warm market, he collected business cards from coffee shops, car washes, he called realtors from realtor signs, he went to networking events, he prospected on Facebook, Twitter, Linkedin,  you name it he did it. However, he didn’t just call a few people a day; he called as many people as he had to a day until he got twenty ‘no’s’ every day. Now you may be thinking that is insane and who wants to hear ‘no’? If you haven’t read the book “Go for No-” you should and this concept will make more sense to you. In any case, I have heard Ray say this on many occasions and I have started implementing into my daily routine. I will tell you that it will toughen you up and after a day or two of people telling you no, you don’t even pay attention to the ‘no’s’ anymore, In a nutshell, the reason you go for no is with every no it brings you closer to a yes. It’s all a numbers game baby!

Marketing Strategy that Paid Off for Ray

Still in the back of Ray’s mind he knew there had to be another way-an easier way to get people reaching out to him. That is when he started learning everything he could about marketing strategies, but not just any marketing strategy–blogging. He is a real proponent of blogging and if you think about your blog like having a piece of real estate on a highly traveled road; people will find you if you are there and they will keep coming back if you give them what they want. Facebook Lives, Periscopes, and YouTube videos are all fine, however Facebook Lives after 48 hours people have forgotten about you and moved on, Periscopes are only up for 24 hours, and you can get your YouTube channel shut down. Ask Ray about that one. It happened to him and it happens to a lot of people. Plus people rarely make comments or share your videos on Facebook, Periscope or YouTube. Your blog however is out there for eternity and people will eventually find you if you market it properly.

Here is an example,  when Ray finally decided to get serious (he didn’t have any choice really) he was in personal foreclosure, bill collectors calling every day, his girlfriend was paying his utility bills and he had like $300 dollars to his name, so he had to do something. He started making phone calls and eventually started writing a blog. By his 5th month of cold calling and calling his warm market and blogging, he had recruited around 40-50 people, which was 99% from prospecting with very little duplication. Here is where it gets interesting and pay attention-around that time Ray received a phone call one day from a guy named Cedrick Harris. In case you have never heard of Cedrick Harris (I had not) is he a internet marketing coach, published author, and speaker who has been in the network marketing industry for over 17 years. He is famous for being a high profile recruiter in various companies; while leading his team in one corporation, he produced over $60 million in revenue and created multiple six figure earners.

Well Ray had no clue who this guy was but he did know that Cedrick was sharp and he knew what he was talking about. Important to note that Cedric found Ray, Ray did not find Cedric. Well lucky for Ray that Cedric did find him because within the first 90 days after Cedric signed with Ray in his opportunity Cedric had recruited 290 people which took Ray’s income to $40k in his 7 month and by month 10 Ray’s income was $50k a month PLUS something else interesting happened, the people who Ray had signed that were just sitting back doing nothing, started producing. Could it be because they saw the light or possibly because they saw what Cedric was doing? Who knows and who really cares, they got busy. So my point here is if Ray had not started blogging Cedric would have never found him. Are you seeing the importance of blogging and marketing?

Now none of this is to say that you can’t build a huge empire through prospecting alone, because we both know many people do, but these people are only known within their company’s. You never hear their name being spoken outside the walls of the company. Marketing on the other hand gets your name and brand known and attracts people to you that otherwise you may never have met. As Ray put it “the world views people on how well known they are.” Think about the famous chef’s you know by name. Do you think they are the best chef’s in the world? I doubt it.

Case in point, Ray’s marketing strategy-blogging has opened doors for him that he would have never imagined and has made him a household name in the network marketing profession. Had he not set out to learn marketing strategies and blogging we probably wouldn’t know who Ray Higdon is unless we were in the MLM company that he was once in, and I doubt very seriously Ray will ever have to worry about being in personal foreclosure and bill collectors calling him ever again!

The other cool thing about blogging is you can collect email addresses, hence people. Ray has collected over 200,000 emails since he started blogging back in 2009. And uses those email addresses to his advantage. For example, he sends his daily blog posts to his email list, whenever he has a promotion his email list knows about it, whenever he’s going to be doing a webinar, his email list knows about it and on and on. Essentially, you can promote whatever you want to your email list. Warning though, don’t be a pitch person, meaning don’t constantly send out emails with offers to buy or join, give your audience value. Teach them something, just like I am doing here. I’m teaching you the value of marketing strategies, i.e., blogging simply by sharing with you what I learned from Ray’s Facebook Live Friday night. If there is one thing that I have learned from Ray over the last year is I.L.T; invest, learn, teach which eventually you will earn.

So you may be asking “But what should I write about?” Well you can literally write about anything. You first have to figure out who your niche market is and what you want to become known for. My niche market is network marketers and helping them succeed in their business, so I write blog posts such as this one to provide value to my audience and hopefully teach you something.

But don’t worry, I got ya covered.

When you visit any web site, it may store or retrieve information on your browser, mostly in the form of cookies. Control your personal Cookie Services here.

Analytics Marketing Privacy Center Privacy Policy Cookie Policy
These cookies allow us to count visits and traffic sources, so we can measure and improve the performance of our site.
Google Analytics
We track anonymized user information to improve our website.
These cookies are set through our site by our advertising partners.
Google Adwords
We use Adwords to track our Conversions through Google Clicks.
Facebook Pixel
We use Facebook to track connections to social media channels.
Decline all Services
Accept all Services
Scroll to Top